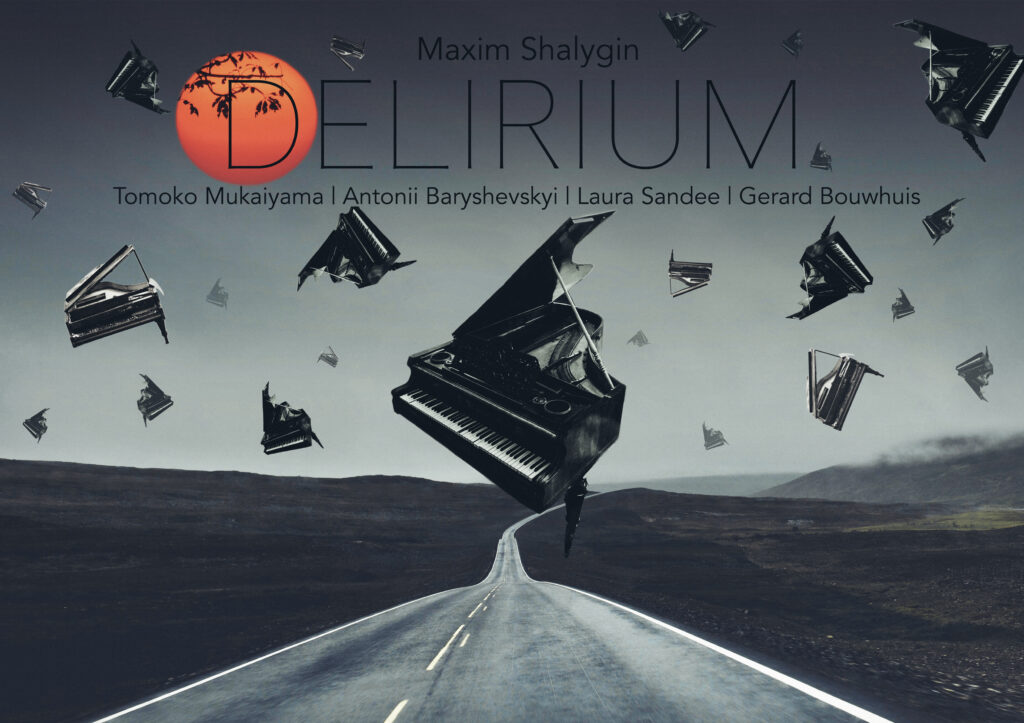 Delirium is an IV chapter in Shalygin's macro-cycle for a lifetime 'S I M I L A R' launched by  in 2017. It is a cycle in which each new chapter is written for a certain number of identical instruments. This cycle takes a special place in the composer’s creativity. Each chapter is strictly limited in terms of instrumentation, but for the rest, composer have unlimited possibilities. Shalygin tries to completely follow the stream of musical material so that it takes him even further than allows imagination. The homogeneous composition of the instruments makes imagination work at its maximum, as it is necessary to create completely different sound images using the same instruments.
Each chapter is written for top-class musicians who can reproduce sometimes the most complex and sophisticated colors of the score. Each new chapter expands the boundaries of the possibilities and opens up new ways of communication with the musical material. The duration of each chapter is at least an hour. This allows the listener to gradually get used to and to better understand the language of the new sound world.

DELIRIUM | Composition & texture
Delirium is a one-part piece, about 70 minutes long. The idea is to gradually bring the listener into a state of weightlessness as if a sense of gravity is missing. For the last few years, Shalygin has been searching for this musical state ('Severade' for cello octet, 'Songlessness' for organ and saxophone quartet). Pianos with a precise sound attack and fading have plenty of resources for this. A precise attack gives a sense of established rhythm, whereas if the rhythm constantly shifts from the strong beats to the weak beats, the sense of precise pulsation will disappear.
At the same time, the flow of musical time can be controlled by the micro rhythmic figures within the periods. This is one of the ways in which monolithic material can be organised. of the new sound world.
The very first expositions of the theme will be scattered over various pianos. The initially simple, single-voice tonal melody sounds pointillistic. Because of the distance between the pianos and the different touches, the melody does not immediately assemble into a meaningful narrative, but it creates a longing to establish a certain balance. Harmony will build up slowly, note after note, but microtonal aberrations won’t allow it to gain stability. The way texture is to weave itself will evoke a feeling of the pianos being played in various time layers, whereas the similarity of the musical material for all pianos will create a peculiar effect of imponderability.
At a certain point, the echo-like elements of the melody begin to be blended into the main melodic fabric, as if one of the pianos were playing in a different acoustic. This enables you to invent a harmonic background within the melodic monologue, which becomes an integral part of the texture, but imperceptible to the ear.
The listener gradually gets the balance as the rhythm of the melody becomes more coherent. The rhythmic structures of all pianos gradually become more complex as they develop, but the melodic framework is still barely distinguishable. When the rhythm is completely sunk into the texture, new textural elements emerge - sudden sforzando of single notes in different registers. Occasionally glissando's from different registers are integrated into the texture.
The glissando sort of washes out the sound of the first material, which smoothly transitions into the second. Loud sounds become more frequent, each with its own tone. They turn into sparkling chords that lead to sudden super-fast passages across the entire keyboard.
At the culmination point, when the pianos are to play at their loudest, filling the whole room with their persistent nervous rhythmic pulsation and mode, a feeling of emotional exaltation must emerge.
The sense of weightlessness is maintained all the time through complex rhythmic structures in the repetitive note material, which is based on the material of the first melody.
The ending of the piece, after a long decline, transitions into the sound of strings. We hear only the piano strings, a melody that melts away in endless glissando...