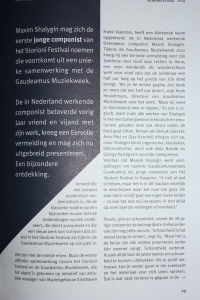 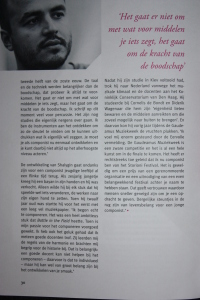 Maxim Shalygin can call himself the Storioni Festival’s first young composer, arising from a unique collaboration with the Gaudeamus Muziekweek Festival.

Having enchanted both friend and foe and earned an honorable mention with his work last year, he is entitled to present himself extensively now. An extraordinary discovery.

Being not too extremely academic and modernist, finding special ways to combine the classical tradition with contemporary music, having an immediate appeal, being able to write a new composition that fits at once into both the Storioni and the Gaudeamus Festivals-these are all requirements that are not easy to meet.

However, the first official co-operation between the Storioni Festival and the Gaudeamus Muziekweek, initiated by the artistic manager of Muziekgebouw Eindhoven, Frank Veenstra brought up a promising name: the Netherlands-based, Ukrainian-born composer, Maxim Shalygin. His Letters to Anna, a “symphony for violin solo” as strange as it is beautiful, that keeps the audience concentrated for almost thirty minutes, earned him an honorable mention during the Gaudeamus Muziekweek 2012. “Seeing the first page you would say: How could this last for half an hour?” says Gaudeamus Muziekweek director, Henk Heuvelman about this work. “But he knows how to carry his audience along continuously.” This comes as no surprise, because, like all Shalygin’s compositions, the piece is both extremely melodious and charged with emotion, and gets under the skin immediately. One is reminded of such names as Henryk Górecki, Arvo Pärt, and Giya Kancheli, but Shalygin has a more organic, classical, folkloristic sound, influenced also by the likes of Bela Bartók and György Kurtág.

So it is for a reason that Maxim Shalygin was proposed to represent Gaudeamus at the Storioni Festival as a young composer. “I have been sketching already, but it’s hard to say where I’ll end up in this stage. Every piece I write lives its own life and surprises me too. I am always looking for hidden beauty.”

Passion, pain, and beauty-those are the keywords with which the 28-year old composer comes up when asked to characterize his work, which is still developing. “Beauty is the hardest thing to find”, he says, “but it’s the one single factor all other parameters boil down to. Beauty unites. I am constantly in search of the best way to express beauty. If you trust yourself, you can go on with this quest and have your materials speak for themselves. This is something that was often lost during the second half of the 20th century. Language and technique became more important than message-something I always try to prevent. It’s not about your means of expression; it’s about the power of your message. I write a lot of works for percussion at the moment. In fact, these are etudes about nothing. I’m just exploring the instruments in order to find the key that lets me express what I really want to say. You have to develop yourself as a composer all the time, which means that you won’t always perform at your highest level.”

Not with standing his youthful age, Shalygin’s development as a composer dates back quite a long time. As a six-year old he got a bayan in his hands and lost his heart to music on the spot. However, he would always make changes to every piece he played, bending it to his own will. When he was twelve he started off with an empty sheet of music paper for the first time. “I began to compose for real. It was a very ambitious project, named Battle in the Field. That’s when my passion for composing arose for good. I was very lucky to get the proper teachers right from the beginning. They taught me the principles of harmonics and some understanding of history. That is important: a good teacher cannot help you composing, because that’s something too personal, but he can be of great importance when it comes to developing your taste.”

Having finished his studies in Kiev, Shalygin left for the Netherlands because of the country’s music culture and the teachers at the Royal Conservatory in The Hague. He studied with Cornelis de Bondt and Diderik Wagenaar, who “let me keep my uniqueness and gave me the means to express it as much as possible.” This bore fruit during last year’s Gaudeamus Muziekweek Festival. “The honorable mention is a great support for me. The Muziekweek competition is fierce and reaching the finale is an exploit in itself. There is a straight line from there to my being the Storioni’s Festival composer in residence now. Winning a prize from a renowned organization and being invited by a festival with a similar standing are great achievements to have to your name. This helps people trust you and may thus get you assignments. And a young composer really needs such a leg up.”

Translation from Dutch to English by Paul van der Woerd